There was a loud buzz from a horn as Team Challenge Racing drifted across the finish line. They had just finished their first race, 24 hours offshore! Cheers and handshakes rang around as the exhausted crew began the short motor back to Hamble. The sailors arrived at the dock with a mixture of feelings; relief, achievement and a desire for more.

For many it was their first time offshore, it had been a real test of character, teamwork and determination. “The end of the RORC Channel Race marks a huge milestone in our campaign” commented Skipper Charlie Ellis “I am extremely proud of the entire team and how they coped with the challenging conditions.” 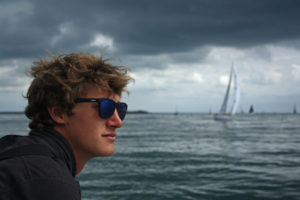 So what happened? What is their story? What was their adventure?

Team Challenge Racing participated in the RORC Channel Race on-board the Sigma 38 Inspiration of BOSS. For the youth crew it was a huge undertaking, a milestone, a challenge and an adventure.

The crew left Hamble at 07:00 for the start line in Cowes. After their pre-race checks they were in attack mode. With a down tide start in light airs we knew it was going to be a conservative start, with a lot to lose if we got it wrong.

After a slow beat out of the Solent we finally reached Hurst narrows; a short sharp chop killed our boat speed and at one point caused us to loose steerage… once we were out of the needles channel we began the long upwind stint do the DZB Mark off of Anvil Point. With the tide ever changing and slowly becoming a hindrance we opted to head inshore (into shallower and therefore less tidal water).

By the time we reached the mark at 20:00 we knew that it had been the less favourable option and that the boats that stayed further offshore received more pressure and rounded further ahead of us. However the battle was far from over. We rounded the buoy at the back of the fleet alongside two other boats, and after a superb bear-away set the lightweight spinnaker was set for the long night ahead. 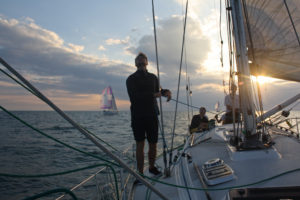 Once we had settled the boat down we began a 3 hour on, 3 hour off watch system. This allowed us to push the boat as hard as possible whilst looking after the crew. With the tide beginning to turn again we opted to go inshore around the back of the island. As we sat in the Nav station glued to the AIS screen we could see that we were making gains, and that our tactical decision was beginning to work.

We rounded the beaming glow of St Cat’s lighthouse at 02:00 on Sunday morning, with the wind picking we had to stay switched on and keep pushing; we were in “Sigma 38 Conditions”. The wind came forward veering from SW to NE, the crew saw lightening and phosphorescence as we ploughed off into the night. The conditions became challenging with us constantly sailing on the verge of a broach; we rotated between the helms every half an hour, allowing us to push hard and maintain focus.

As daylight broke the wind angle became too tight to carry the kite, we therefore peeled from the 0.9 AP to the G1. We were able to maintain high speeds and push away from our competitors who were behind. We also began to close with the boats ahead.

After reaching the Owers cardinal mark we tacked and fetched towards the forts in Portsmouth. By the time we reached Spit sand fort the wind had shut down and this made the final few miles into the finish long and slow. It also allowed our competitors to close up on us. We crawled across the finish line at 10:10 am, after a very challenging race.

So their first 24 hours offshore, a 3rd place in class on elapsed time and a lot of lessons learnt. The end of the Channel Race marked a huge achievement for the project and we look forward to crossing the start line of the RORC Cherbourg Race in early September. 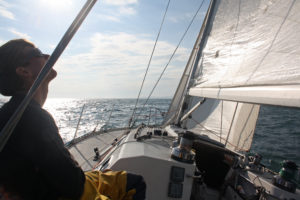 Skippers Comment: “It is an honour to lead such a talented team and I am extremely proud of them all; however special mention must go to Ella Boxall who really stepped up to the challenge by taking the helm and driving the boat extremely well in some challenging conditions.”

On behalf of the team I would like to thank our Official Training Partner the British Offshore Sailing School for all of their help and support, none of this would be possible without your amazing guidance.