Team Challenge Racing are delighted to announce that they have been awarded The Oldland/ Watts Aquadanca Trophy by the Royal Ocean Racing Club! The Trophy is presented to the Sigma 38 with the highest number of points over the duration of the RORC Series. The team will be accepting the award at the  RORC Annual Dinner and Prize Giving on Saturday 19th November.

Team Director/ Skipper Charlie Ellis commented “The team has worked incredibly hard, its been a big learning curve, and we have come a very long way. What a great way to end the season. Our focus is now currently set on our Rolex Fastnet Race 2017 campaign, and securing a sponsor!”

The team would like to extend its gratitude to everyone who has been involved in the campaign so far. We have received so much valuable support since the start, we really couldn’t have achieved all that we have to date without their help. 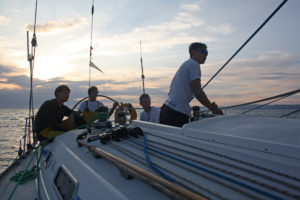