Team Challenge Racing pairs up with White Ocean Racing to experience what it is like to sail on one of the fastest monohulls in the world. 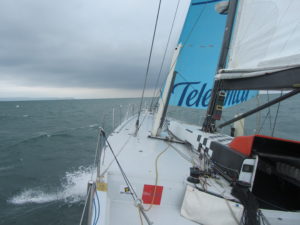 At 05:30 two excited teenagers left their house in Southampton and drove up to Weymouth, to crew on Steve White’s Volvo Open 70 (Blu Qube). The early start wasn’t something that couldn’t be fixed with a lot of caffeine and some loud music. The roads were quiet as we charged towards Portland Harbour like excited boys on Christmas day.

It was windy, 30 knots from the North East, it was going to be a wet upwind slog to Portsmouth. After manoeuvring from our moorings we were off. The boat was a hive of activity; fenders being stowed, sails being moved, winches groaning and keels buzzing into life. Just like clockwork everyone knew what needed to be done. Once we were set up we began to deploy our J4 (Small Jib) the furling gear began to rattle as the sail neatly unfurled. 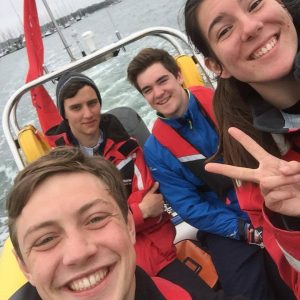 The wind was running from the top of nearby cliffs made it very gusty and shifty, this meant that we were kept on our toes; constantly trimming and trying to keep the boat in control. The boat rocketed upwind at 15 knots, and the calm sea state meant that it wasn’t too wet.

Suddenly there was a colossal gust, we all grabbed the rail as I saw the canting keel emerge from the water! The helm was battling with the wheel as we fought to get the boat back up to speed. It was a real workout on the wheel, a really great sail. The Volvo is extremely responsive to sail and behaves just like a huge offensive dinghy.

Before we knew it we were approaching Portsmouth, in a 70 footer the Solent begins to feel smaller, the waters become congested and suddenly you have to become a lot more reactive. Within an hour of passing the Needles we had docked in Haslar. After packing up and saying goodbye it was time to head home for a well deserved shower and a bite to eat. 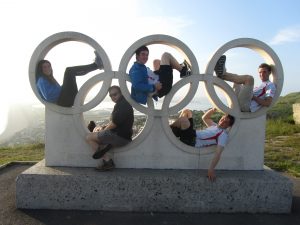 Two days later we were preparing to take on the light windless sail back to Weymouth. After a coffee and briefing in Hamble, four of the team were jumping onto the Blu Qube rib and jetting out at 40 knots to meet the boat at Hurst. We arrived with huge grins on our faces and safely carried out the transfer between two moving boats, we stepped on board feeling like rock stars.

Sadly there wasn’t a puff of wind however the motor back provided the perfect opportunity to learn some more about the set up of the boat. We also had the opportunity to send Will up the mast for a “Rig Check” twenty minutes later we remember that he was still aloft and promptly brought him down.

A breeze line provided some hope and so the MHO (Masthead Code 0) was setup and deployed, unfortunately it was too late and the only means of filling the huge 600 m² sail was to motor backwards… The winches cluttered into life as we furled it and began to pack up the boat. By the time we passed the outer breakwater of Portland harbour we were all ready to step ashore. 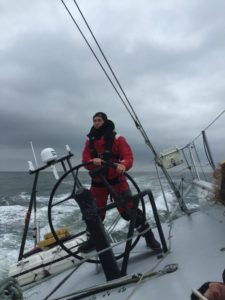 We headed for Cove House Inn and then the Olympic rings on the top of Portland Bill. The sun and the sea began to merge, the beach faded into the distance. It felt like paradise, one of those moments that will stay with you for the rest of your life.

For most sailors crewing on a Volvo 70 is a dream. Team Challenge Racing were lucky enough to be given the opportunity to chase their dreams. These boats are powerful, fast, thrilling and physical. For the sailors within the team it provided a valuable insight into life on an ocean racing boat.

On Behalf of Charlie, Ella, Harry and Will thank you very much to Steve White for giving us this amazing opportunity.